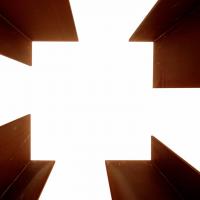 These two pictures have been taken with 2 years apart.

The first one was L’Œil de Dieu. It was taken in Broadgate Circle, London. It is a vision of a gigantic sculpture from Richard Serra, in which one can enter. From the inside, looking towards the sky, there is like an eye of god to be seen. The sculpture is 55ft high. Richard Serra is an American minimalist sculptor. He worked a lot with Corten Steel. This steel has the specificity to be rusted from the outside but not in its core, which makes it long lasting.

Some would probably say my picture is not a proper artwork, because it is a photography of an artwork. I would be tempted to answer "Whatever! Is my work art?" But if I admit I usually try to create artwork, I have to say my vision from inside this sculpture is different than the sculpture itself. Is it enough? I haven’t decided yet.

The second is a sculpture taken in Berlin in February 2015. It is part of the Berlin Wall Memorial. It represents a watch tower, as they were during the cold war.

When I saw it, I immediately realised I had found a sister to L’Œil de Dieu. And because of what it represents, it was clear enough to me to entitle it Le Carré du Diable (devil's square).

I’m not saying the soldiers in the watch tower were evil. The force which separated people of a same nation, same culture and same blood should definitely be the endeavour of the devil.